Back from Donegal where I attended the opening of the Greenfort exhibition at the Ross Gallery in Letterkenny on Friday night.

Initially referred to as the Cousins Exhibition, due to the fact that we’re all first cousins – if you’re an artist and a cousin, you’re in – the exhibition was organised and co-ordinated by Damien McGinley and gallery owner, Janet Ross. It was an eclectic mix of work by eight people, and included paintings, mixed media, prints, photos and embroidered pieces. It was also a brilliant family reunion – there were people there I hadn’t seen for a long, long time.

The exhibition gave me an opportnity to produce and exhibit archival prints of spreads from the books – something I’ve been meaning to do for a long time. Each one was printed digitally on A2 Ilford Gallerie Pearl 290gsm using Epson Ultrachrome pigment inks in signed limited editions of 25.

The Greenfort Artists are now registered as an official collective with Donegal County Council – so watch this space!   JOHN 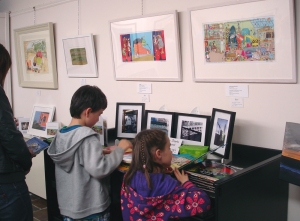