Kicking off the half-term week on Monday with a full-day workshop in Putney with Surrey Explorers (Potential Plus UK). The children produced amazing work including Joss who created the piece in the video, and Daniel, Sebastian and Almaz who created the examples below that.

This tutorial is a special request from someone who wants to send a Covid compliant, pop-up hug to a friend. You’ll need 2 sheets of A5 light card for this, as well as glue-stick, scissors, ruler, something to draw with and craft knife…plus an adult to help with the craft knife if you’re very young. Difficulty rating, I’d say middling. On a technical note, this one uses tube post armature for the main sections and moving straps attached to the gutter or central fold for the arms.

I managed to squeeze in a school visit to Bredhurst Primary in Gillingham at the beginning of October but now with current restrictions these events have become rare.

I was aware of the need to make the visit Covid-compliant. Due to class bubbles a whole-school assembly was out of the question so instead I produced a mini version of my talk in video form (see below) in order to give some insight into my practice. It had the happy consequence of my being greeted by children on the day who seemed to know me already.

The card for the workshops was pre-packaged and then only handed out by the teaching staff. During the workshops, I did my usual thing, but at a distance, teachers did all the close up checking and helping. I made more of the demo part of the session where I turn a pop-up mechanism into a finished 3D spread using the children’s story ideas. And I made sure everyone had all the information they needed to finish the group pop-up books after I had moved on to the next class.

The school felt surprisingly normal but they had clearly put in many important measures to keep everyone safe – no sharing of equipment (I had to keep reminding myself not to borrow scissors or gluesticks), staggered playtimes and hand sanitiser everywhere. I also had to exit the building and make my way around the outside of the school to get from class to class.

It’s not clear when things will go back to normal but it’s been an opportunity to explore new ways of interacting with schools. Things like Zoom, for example, seem to work well and will be a useful addition going forward, especially for schools further afield. However, it can never replace the wonderful feeling of interacting live with the children that I experienced at Bredhurst and all the other schools I’ve visited in the past.

Very happy to play a small part in this initiative along with 400+ wonderful illustrators.
Igniting Writing, Wokingham Library’s teen creative writing club, is running a brand new creative writing contest called ‘Illustration Inspiration’! The aim of the contest is to inspire young writers out there to combine words and images and create your own amazing story.

The contest is based around a gallery on Flickr, where over 400 talented illustrators have kindly shared a piece of their artwork for writers entering the contest to use. All you need to do is pick out three pieces of art from the gallery and write a story that links them together – it’s a great chance for you to write a story with art from professional illustrators!

To view the gallery, click here: https://www.flickr.com/photos/ignitingwriting
This contest is being led in tandem with the Wokingham Children’s Book Festival https://wokingham-tc.gov.uk/bookfest/

Latest pop-up tutorial in the series.
Make a pop-up rainbow for your favourite NHS person.

I’m very grateful to the schools that have invited me in over the years to talk about my work, run workshops and share my pop-up skills. I wanted to offer them something during this difficult time so I’ve been creating a series of online pop-up tutorials.

I’m currently editing video number 4. Each one deals with an aspect of paper-engineering – parallel fold, v fold, platform fold and so forth and the designs will become more complicated over time. My intention is to continue to make the videos even after everything turns back to normal – whenever that might be. Also, I’ve always wanted to provide people with a resource after they’ve done my workshops and now seemed as good a time as any to create it.

Quite rightly, no comments are allowed on the YouTube videos intended for families and kids but if you have any questions about the techniques, feel free to ask me here.

I celebrated World Book Day with the children of Annemount School in Hampstead Garden Suburb. A few of the children dressed up as characters from the Big Match and one boy, Rafael, completed his costume with a ‘book cabinet’ for guessing the book. The box opened to reveal mini pictures of all of my books.

I couldn’t believe the work that Rafael and his family put into this – two days I’m told. He wanted to give the box to me to take away at the end of the day (with his Mum’s permission, of course) – it now takes pride of place on my studio wall. 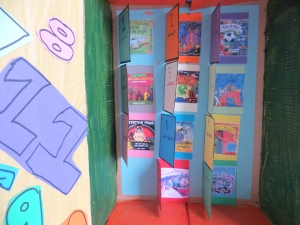 Final outcome of the ‘And So She Did’ project at St Albans Museum. Video shows the three giant pop-up constructions made with local families and museum volunteers, based on women with local connections.

My recent three-day residency at the new St Albans Museum was part of the ‘And So She Did’ programme and looked at three women with some connection to St Albans – Constance Lytton, Sarah Churchill and Boudicca.

The brief was to work with visiting families and adults to produce large-scale pop-up constructions featuring the three women. I aimed to give the feel of a picture frame combined with stage set and to create a narrative for each of the women using elements from their lives along with the use of text.  Preparation was key but also important was an understanding that the participants would ultimately determine the direction and look of the final pieces. Week two of the project had further workshops with textile artist Flea Cooke creating banners about Margaret Wix, Syeda Momotaz Rahim and Muriel Green.