Two years ago, to the date, I noticed a newspaper article about this artist’s then-intention to give away 1,000 hand screenprinted paintings by leaving them around the streets of London.

On the night of Friday 14 November 2008, 20 teams of distributors would begin distributing the individually-numbered, unique multiples at the edges of the capital, working their way towards the centre by daybreak. Mention was also made of ‘well-known and not-so-well known landmarks’.

Our son figured that someone on a push-bike hitting as many local and central landmarks as possible, at a certain time of day, might be in with a chance of coming across one of the prints.

On this basis, I (note the use of the first person pronoun – singular) set out at 5:15 am on the Saturday morning to do a two and a half hour circular bike trip of the capital in search of some art. I did enjoy cycling across a deserted Millennium Bridge at 6:30 in the morning – think early episodes of The Avengers or Doctor Who – but, ultimately, returned to base empty-handed. Sad, I know, and something one should really keep nice and quiet about.

But then I thought, no! I’m not going to let my efforts go to waste! I decided if I didn’t get anything from Adam Neate, then Adam Neate would get something from me! And so a box was born… 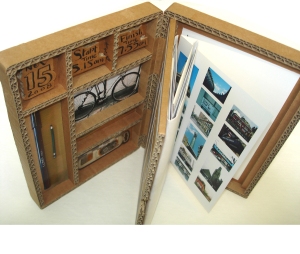 and designed, made and dispatched to Adam at his gallery, the Elms Lesters Rooms.
And no more was thought about it. 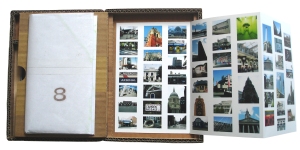 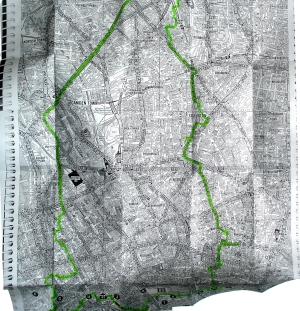 Some time later, I discovered, to my amazement, that the box had been featured in Adam’s book about the event. Needless to say, I was thrilled and touched.

I also got to meet the man himself who kindly signed my copy of the book. Result!   JOHN